You should choose a distribution which stays close to the stable upstream software releases, typically rolling release distributions. This is because frozen release cycle distributions often don’t update package versions and fall behind on security updates.

For frozen distributions, package maintainers are expected to backport patches to fix vulnerabilities (Debian is one such example) rather than bump the software to the “next version” released by the upstream developer. Some security fixes do not receive a CVE (particularly less popular software) at all and therefore do not make it into the distribution with this patching model. As a result minor security fixes are sometimes held back until the next major release.

In fact, in certain cases, there have been vulnerabilities introduced by Debian because of their patching process. Bug 1633467 and Bug 1679430 are examples of this.

Holding packages back and applying interim patches is generally not a good idea, as it diverges from the way the developer might have intended the software to work. Richard Brown has a presentation about this:

Traditionally, Linux distributions update by sequentially updating the desired packages. Traditional updates such as those used in Fedora, Arch Linux, and Debian based distributions can be less reliable if an error occurs while updating.

Atomic updating distributions apply updates in full or not at all. Typically, transactional update systems are also atomic.

A transactional update system creates a snapshot that is made before and after an update is applied. If an update fails at any time (perhaps due to a power failure), the update can be easily rolled back to a “last known good state."

Even if you are worried about the stability of the system because of regularly updated packages (which you shouldn’t be), it makes more sense to use a system which you can safely update and rollback instead of an outdated distribution partially made up of unreliable backport packages without an easy rollback mechanism in case something goes wrong like Debian.

Acrh Linux has very up to date packages with minimal downstream patching. That being said, Arch based distributions are not recommended for those new to Linux, regardless of the distribution. Arch does not have an distribution update mechanism for the underlying software choices. As a result you have to stay aware with current trends and adopt technologies as they supersede older practices on your own.

For a secure system, you are also expected to have sufficient Linux knowledge to properly set up security for their system such as adopting a mandatory access control system, setting up kernel module blacklists, hardening boot parameters, manipulating sysctl parameters, and knowing what components they need such as Polkit.

If you are experienced with Linux and wish to use an Arch-based distribution, you should use Arch Linux proper, not any of its derivatives. Here are some examples of why that is the case:

While you should not use outdated distributions like Debian, if you decide to use it, it would be a good idea to convert it into Kicksecure. Kicksecure, in oversimplified terms, is a set of scripts, configurations, and packages that substantially reduce the attack surface of Debian. It covers a lot of privacy and hardening recommendations by default.

There is often some confusion about “security-focused” distributions and “pentesting” distributions. A quick search for “the most secure Linux distribution” will often give results like Kali Linux, Black Arch and Parrot OS. These distributions are offensive penetration testing distributions that bundle tools for testing other systems. They don’t include any “extra security” or defensive mitigations intended for regular use.

Do not use the Linux-libre kernel, since it removes security mitigations and suppresses kernel warnings about vulnerable microcode for ideological reasons.

If you want to use one of these distributions for reasons other than ideology, you should make sure that they there is a way to easily obtain, install and update a proper kernel and missing firmware. For example, if you are looking to use GUIX, you should absolutely use something like the Nonguix repository and get all of the fixes as mentioned above.

You should use a desktop environment that supports the Wayland display protocol as it developed with security in mind. Its predecessor, X11, does not support GUI isolation, allowing all windows to record screen, log and inject inputs in other windows, making any attempt at sandboxing futile. While there are options to do nested X11 such as Xpra or Xephyr, they often come with negative performance consequences and are not convenient to set up and are not preferable over Wayland.

Fortunately, common environments such as GNOME, KDE, and the window manager Sway have support for Wayland. Some distributions like Fedora and Tumbleweed use it by default, and some others may do so in the future as X11 is in hard maintenance mode. If you’re using one of those environments it is as easy as selecting the “Wayland” session at the desktop display manager (GDM, SDDM).

Try not to use desktop environments or window managers that do not have Wayland support such as Cinnamon (default on Linux Mint), Pantheon (default on Elementary OS), MATE, Xfce, and i3. If you are using i3, consider switching to Sway, which is a drop-in replacement with Wayland support as mentioned above.

Here is a quick non authoritative list of distributions that are generally better than others: 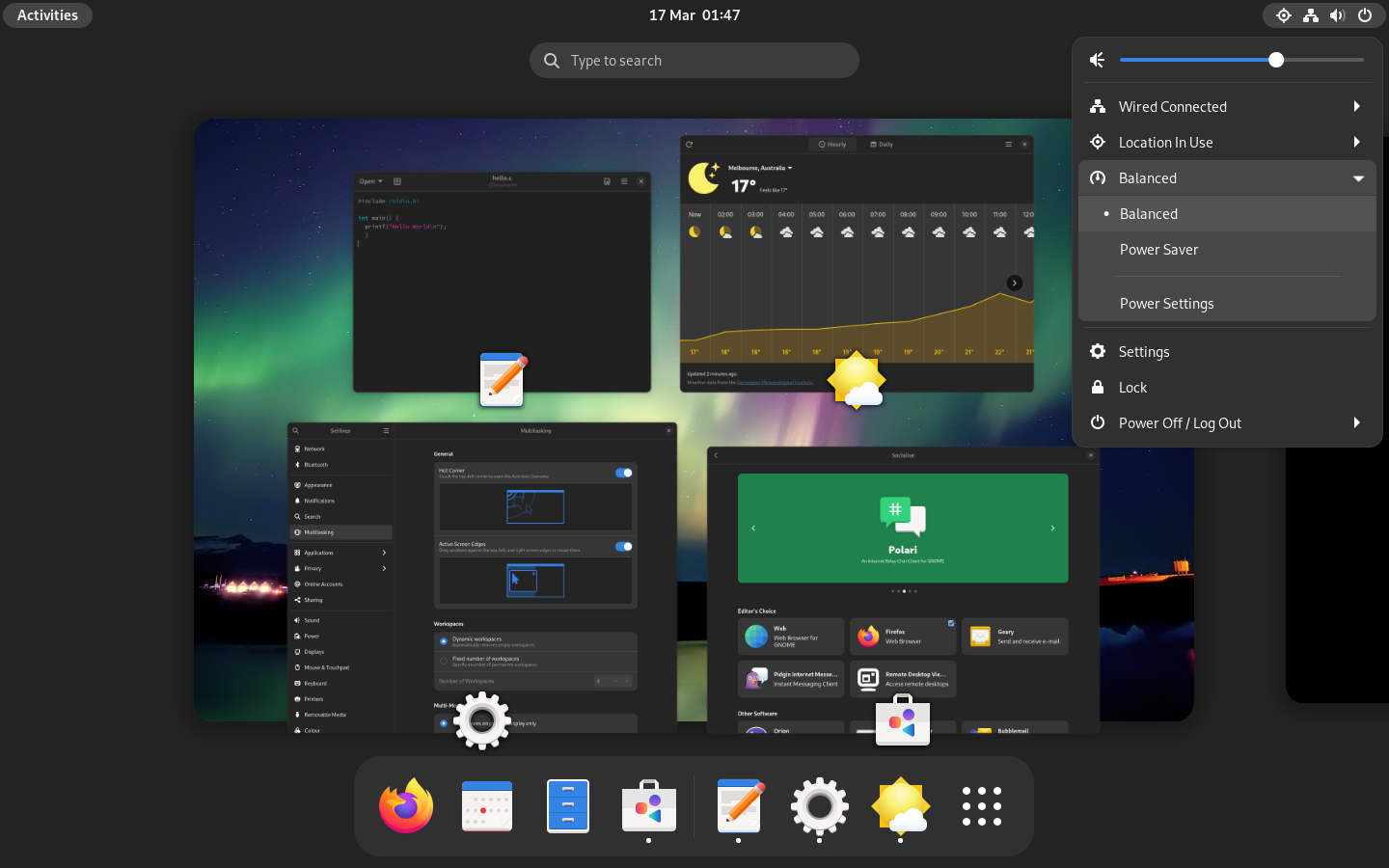 Fedora Workstation is a great general purpose Linux distribution, especially for those who are new to Linux. It is a semi-rolling release distribution. While some packages like GNOME are frozen until the next Fedora release, most packages (including the kernel) are updated frequently throughout the lifespan of the release. Each Fedora release is supported for one year, with a new version released every 6 months.

WIth that, Fedora generally adopts newer technologies before other distributions e.g., Wayland, PipeWire, and soon, FS-Verity. These new technologies often come with improvements in security, privacy, and usability in general.

While lacking transactional or atomic updates, Fedora’s package manager, dnf, has a great rollback and undo feature that is generally missing from other package managers. You can read more about it on Red Hat’s documentation.

Fedora Silverblue and Fedora Kinoite are immutable variants of Fedora with a strong focus on container workflows. Silverblue comes with the GNOME desktop environment while Kinoite comes with KDE. Silverblue and Kinoite follow the same release schedule as Fedora Workstation, benefiting from the same fast updates and staying very close to upstream.

You can refer to the video by Adam Šamalík linked above on how these distributions work.

MicroOS has a much smaller base system than Tumbleweed and mounts the running BTRFS subvomumes as read-only (hence its name and why it is considered an immutable distribution). Currently, it is still in Beta so bugs are to be expected. Nevertheless, it is an awesome project.

Whonix is a distribution focused on anonymity based on Kicksecure. It is meant to run as two virtual machines: a “Workstation” and a Tor “Gateway.” All communications from the Workstation must go through the Tor gateway. This means that even if the Workstation is compromised by malware of some kind, the true IP address remains hidden. It is currently the best solution that I know of if your threat model requires anonymity.

Some of its features include Tor Stream Isolation, keystroke anonymization, boot clock ranomization, encrypted swap, hardened boot parameters, hardened kernel settings, and a hardened memory allocator. One downside of Whonix is that it still inherits outdated packages with lots of downstream patching from Debian.

Future versions of Whonix will likely include full system AppArmor policies and a sandbox app launcher to fully confine all processes on the system.

Although Whonix is best used in conjunction with Qubes, Qubes-Whonix has various disadvantages when compared to other hypervisors.